Today's watch is a 1970s Elgin new old stock, left over in a jewelry store inventory. I normally don't buy these kinds of watches, referring to them as "disco watches" (i.e., from the tasteless fashion era period that gave rise to equally tasteless disco music) or as "fugly," which is a conjugation of the words "ugly," and ... well ... you can probably guess the other word. 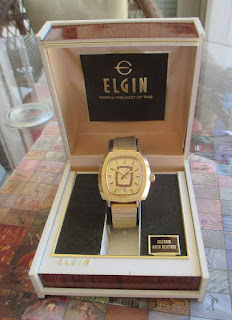 But there was something about this watch that drew me in ... it's so ugly, it's cute in its own way. And it teaches us a few things about typical watches from this period. Big and clunky, and not all American despite bearing that most American of watch brands, Elgin. 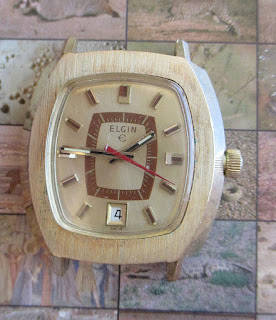 Elgin, formerly headquartered in a city in Illinois bearing the same name, had gone out of business in 1968, and the factory demolished. The brand name was sold to various companies over the years, and the watches they sold had movements imported from Switzerland. The watches were cased, banded, and boxed in the United States, and then wholesaled to various retail merchants (often discount department stores).

This is just an example. The gold electroplated tonneau shape case measures 44mm long lug tip to lug tip, by 38mm wide at the broadest point (by the crown) by a hefty 13mm thick. It has a raised plastic crystal, imminently impractical for its tendency to get bumped and scratched. It has its original signed crown, and a stainless steel screwback case that still has its original plastic scratch guard attached. 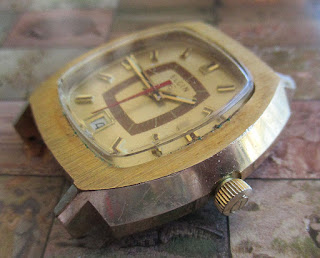 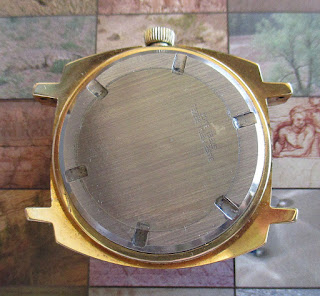 The two-tone dial has raised markers, red sweep second hand, and an apeature at the 6:00 position for the date. The inside case back is engraved "Elgin S.A. Switzerland" and also "88401," which I assume is a reference or model number.

Powering this monstrosity is an A. Schild Caliber 1914, a 17-jewel manual wind movement with date that "quicksets" by pushing in on the crown. The Cal. 1914 was produced beginning in circa 1970, and has numerous variations, including day/date, and automatic versions. 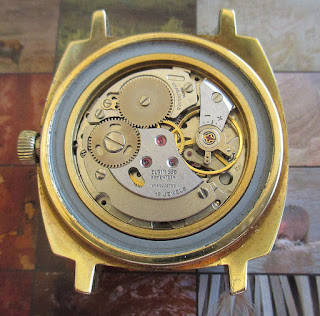 The watch comes with its original bracelet/band, which is a J.B. Champion "half-n-half" band with yellow gold (filled or rolled gold plate) top caps, and a stainless steel back. It has stationary pieces at the two ends, and a scissors expansion piece in the center, so that the band can be slipped on and off without having to unclasp any sort of fastener. 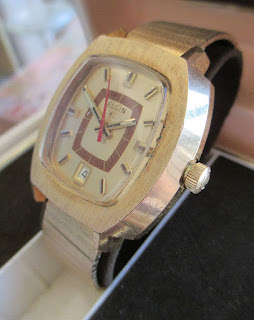 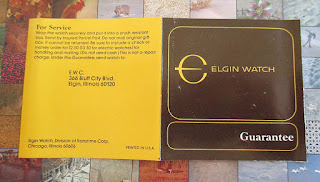 It shows the owner company as Elgin Watch, Division of Transtime Corp., of Chicago, Ill., 60606. The company is long defunct, and the brand was subsequently owned for many years by M.Z. Berger, a large import company with headquarters in New York City. The address for warranty service is indicated as E.W.C., 366 Bluff City Blvd., Elgin, Ill., 60120, also long out of business, but a large brick warehouse looking building sits on the property.

I know there are collectors out there who love and specialize in the thick heavy watches of the 1970s. I have no particular attachment to the watch, and would be open to trades. If interested, email me at bruce@brucesvintagewatches.com.