Mido: A Giant in Automatic Wristwatches

Many watch brands in the vintage world offer superior quality but nevertheless are underrated. The watches produced by Mido are, in my opinion, just such an example. They are excellent watches both from aesthetic and mechanical standpoints.

The company put its emphasis on automatic movements, offering its first self-winding movement in 1934 (while others waited until the late 1940s and even ‘50s). They perfected the design of their self-winding mechanism to the point where it only had seven parts, while most others had 16. Eventually, the company offered ONLY automatic watches.

Mido was founded in 1918 by Mr. Georges G. Schaeren (1882-1958) along with brother Henri. The company immediately began advertising primarily wrist versus pocket watches. The name Mido is a form of the Spanish verb medere, meaning “to measure.”

During the 1920s and early 1930s, Schaeren’s eccentricity revealed itself in unusual watch designs. Examples include a direct reading timepiece with a normal seconds hand (versus tiny print on on a disc), 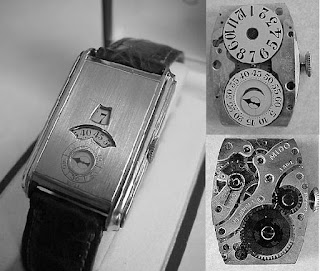 and a number of watches styled after the grill covers of various automobiles including Bugatti, Buick, Ford, Excelsior, Peugeot, and Chevrolet (these are considered by many to be the most rare and collectible of all Midos). (Ettore Bugatti's personal Mido grill watch sold in May 2021 for $340,000 by the way). 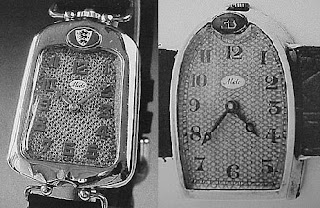 The company made its first automatic movement in 1934, and it began to appear in ads in 1935. It was a bumper automatic, and while the rotor traveled in both directions, it wound the mainspring only in one direction. Called a “Multifort Superautomatic,” the automatic portion was rather complex and consisted of 16 parts. Here we see the introduction of two made-up words – Multifort and Superautomatic. As far as I can tell, Multifort means "many strengths." The watches combined the properties of being waterproof, shockproof, anti-magnetic and, from 1935, automatic. The meaning of the term "Superautomatic" has been a matter of some debate. But the story goes that Mido was obliged to publish clarification of this term in the Swiss Watch Journal. What they said was Superautomatic combined features all of the benefits of Multifort (noted above) while winding automatically with the arm's natural movements.  I think they were reaching on that one!

In 1937, Mido released its first water-resistant chronograph called the "Multi-Centerchrono." It was a revolutionary design that placed all the functions of the chronograph on the center post, along with the hour, minute and constant seconds hands of the watch. This model is another one considered quite collectible, not only by aficionados of Mido, but of chronographs as well. 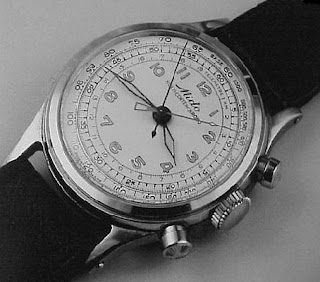 By 1954, the company had perfected its automatic movement to the point where the auto-wind portion of the movement had only seven parts. The company called this its "powerwind" system - another made-up word which is seen on many Mido watch dials. I should note that many Mido watches from this period (and even into the '60s) are small by comparison to today's watches, and even small in comparison to other brands of the day. 33mm is considered by many to be an "avereage" size watch. Many vintage Midos are in the 29mm range. For some, this is a turn-off; for others not so.

By the 1970s, Mido (like many companies) could not stand alone against the coming quartz revolution. The company which had remained family-owned since 1918, sold out to the ASUAG Swiss consortium in 1971. ASUAG eventually morphed into “The Swatch Group,” where it remains today. Many models of thr current line of Mido watches bear a resemblance to those watches produced in the 1940s, ‘50s and ‘60s. 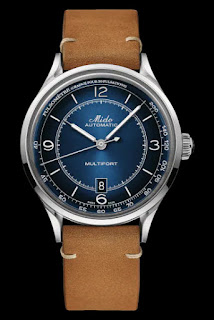 As you can see, you could buy a vintage Mido, and be right in fashion!

Hey, thanks for reading. If you enjoyed this short piece on Mido, you should order my full report. It's 16 pages long and contains more than 90 images of Mido vintage watches, including those from a rare brochure given to visitors of the 1964 Worlds Fair. The report is only $10, about the cost of a lunch. Payment is via Paypal, and you can use your Paypal balance (if you have a Paypal account), or most debit/credit cards (click on the bar that reads "Pay with debit or credit card"). It will be delivered to your email inbox in PDF format, usually within one business day. You can view on your device (computer, smart phone, tablet, etc.) or print a hard copy if you wish. The file size is 9 megabytes, so please be sure your email server can handle a file of this size! Text and images are for personal use and may not be copied without permission. Click on the button below to order.

Posted by Bruce Shawkey at 9:34 AM

Bruce Shawkey
Bruce's World of Watches began in 2019 to promote my former sales website, founded in 1996. Since suffering a stroke in December 2020, I've had to stop selling watches and let my website go dark. In a way, it's been liberating. I'm more free to write about watches objectively, not necessarily how my words will impact my sales. Yes, there are a few more formatting errors now due to hairballs in the brain caused by the stroke. But in a larger sense, I think it is a better blog and hope you find it informative. Bruce